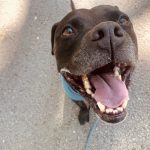 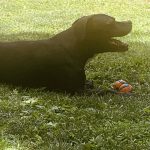 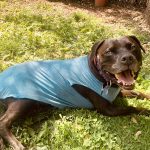 I am a teacher. My days are spent showing dogs acceptable new behaviors and coaching their humans on how to do the same. I have learned a lot over the years by listening and observing, and I have found that enlightenment does not stop when I leave work.  Dogs are amazing creatures. Without their knowledge, they often teach us so much about life, just by simply being dogs.
It has been 12 years since I rescued the wild-eyed, bounding ball of limbs who I now call “Finn” from the end of a rifle, his short life until then spent alone in a barn because other dogs on the property were attacking him.  As I look as Finn’s graying face and think about all the things I have taught him over the years, I am so grateful for the perspective I have gained from sharing my life with him.
Patience may not come naturally, but it can be taught. Finn loves his walks. Two knee surgeries, arthritis, and general old-guy stuff that keeps a couple of local veterinarians in business do not stop him from bouncing along next to me with a smile on his face through our neighborhood parks.  However, once we are home, getting up the stairs to the third floor takes us a little time.  At each landing, he pauses and looks back to me and then assesses the task of actually walking up all 13 steps.  Sometimes he crinkles his eyebrows, glances at me again, circles, and pauses.  I do not rush him. I give him a soft smile and sit on the step or give him some space to rest before we tackle the stairs together.
If you knew me B.F. (Before Finn), you might chuckle that anyone would use the adjective “patient” to describe me. I was the person who tapped my foot in anticipation as soon as I asked a question or looked at the time if someone lingered too long over the chickpeas at the salad bar.  Sure, we had a dog growing up, but my job was to walk, play, and hang out with her; the fun stuff.  When I was busy, there were five other people to pitch in to make sure she had a good life.  With Finn, my responsibilities morphed into caretaker, teacher, and social chair (all 24 hours a day) to a dog who had been abandoned, was unsocialized, and had more energy than any person I knew, even after multiple cups of espresso. I quickly learned that not everything hinges on my schedule.
I still remember our first trip home to Ohio after living in Chicago a mere three months.  I was ecstatic to have our family dog Goldie show Finn the ropes and take some of the play time off my hands.  Potty training, exercising him, showing him over and over to “chew on this bone, not my arms,” and preventing him from joyfully stealing neighborhood children’s  ice cream cones had completely exhausted me.  After the long drive, we walked in the door, me anticipating Goldie greeting and inviting Finn to romp while I hugged and caught up with my siblings and parents.  Oh, was I wrong.
I opened the door, and before I knew it, my arm was jerked forward with such power that I thought Finn had suddenly transformed into a tow truck.  The leash burned my hand as Finn tore off in hot pursuit after our cat, Apple.  The cat, oy–I had never seen him around a cat, as I quickly recalled.  Apple raced up the Christmas tree, and oblivious to his size and speed, Finn followed her. Mid-way up the tree, it toppled over into the fish tank, which started to wobble as Finn continued to chase Apple down the stairs.
The cat was miserable, and we were exasperated, but Finn was having a blast.  We gave him a little time in the backyard so we could clean up the mess and I could devise a plan for the rest of our stay.  Within seconds, Finn climbed the upright ladder to the above-ground pool and dove into the icy water.  After my dad begrudgingly rescued him, I dried Finn off, and he was then off to tackle my sister, giving her big, wet, slobbery kisses.
Even then, I knew he had no clue he was being “bad.”  Finn was just being a dog and doing what he enjoyed.  He has since learned how to make a much more reasonable entrances at family functions. Meanwhile, I have had to learn to be patient with behaviors I thought were naughty and chip away at them one (or a couple) at a time.  In return, he patiently warms my leg while I have a cup of coffee before our first walk and lays on his bed while I search for the latest hiding spot for my shoes.  No small feat– if Finn were human, he would be the toe-tapping, watch-staring kind of guy. But, I guess we have taught each other a lot about patience over the years.
This is the first in our Lessons Learned Series, helping you have a Better Behaved Dog through stories of our own and our clients over the years. Finn forgives me for my human ways, so I learn to be patient, and work with, his natural dog behavior.  Stay tuned for the next article about trusting your gut when looking for help for your best friend(s).
Article edited by Brinda Gupta and photo courtesy of Robyn Rachel.

Orders that come in Friday, May 27th or after will ship Tuesday, May 31st. Have a great holiday weekend!