Face of a Growly Goober 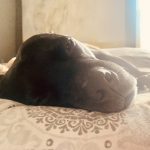 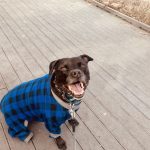 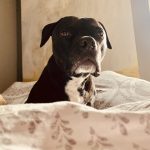 Face of a Growly Goober

It’s no secret. I melt like a chocolate bar in the glorious sun when I see a grey-faced dog. I met delightful Sammie when he was a blossoming boy and man, did he LOVE jumping on people. How could he not? Sammie was such a happy guy who had to share his excitement at the sight of a “PERSON!” Then, I had the golden opportunity to see him again nine years later to help teach this choosy canine to learn that other dogs were not as despicable as he seemed to think they were. Here’s Sammie’s story.

I saw a man walking a golden retriever puppy a few blocks from my house when I was driving to the store. I stopped to let the gentleman know that a fox was walking around the neighborhood. I’m not in the habit of stopping strangers on the street. But I had seen the pair strolling before and thought it was essential to keep that cutie-pie puppy safe.

We started talking about Sammie, the puppy, and he said: “Do you want him?” He continued by sharing that his girlfriend and her kids loved him. But they weren’t home often, so they felt guilty about the extensive amount of time Sammie was alone and cooped up in his crate. While this may sound awful to die-hard dog lovers, they did love him and took excellent care of him. He was healthy and well-trained in obedience at just 4-1/2 months old! They knew their limits, and I was lucky to have landed my darling dog.

What’s the most significant assumption people make based on your dog’s looks?

He likes dogs! Sammie loves people and will do ANYTHING to be near a human being. But he has absolutely no interest in interacting in ANY way with neighborhood dogs. If another dog dares to sniff Sammie, he makes sure the dog understands his displeasure with a warning growl and lunge.

Sammie is a big golden retriever, so people cross the street when they see us coming. If they only knew, he wants to lick them from head to toe and lean in for a good petting session!

What are the biggest obstacles you and your dog have overcome together, and what was most helpful?

I adopted Sammie when he was almost five months old. He was well-trained but not socialized at all (there’s a difference) and was fearful of other dogs. I shared my home with a 10-year-old Eskie mix and spent the necessary time and effort properly introducing my dogs. I wanted to make sure my home was peaceful, and my dogs were happy. But the sight of other dogs in the neighborhood turned Sammie into a barking, snarling, lunging lunatic.

The biggest obstacle came on walks with Sammie. If he saw a dog, he would bark and growl and lunge like a crazy boy! It took a lot to control him and get him to calm down even after the dog had passed us.

Enter Brandi and the “touch” cue. Redirecting Sammie’s focus from the dog to me using “touch” was a game-changer! Being the smart dog that he is and with Brandi’s fantastic guidance—it didn’t take long for both of us to enjoy our long walks.

If you could make a sign for the world to understand your dog’s individual needs better, what would it say?

All dogs stay away, PLEASE.

Sammie is almost 14 years young now. He’s no longer dog reactive. I still do “touch” with my sweet senior for mental stimulation. But now I only need to put my hand in a position for him to nose my fingers. He knows what I want, which is excellent because his hearing is starting to fade— unlike my love for him and his adoration for people.

***This article is a re-post from 2016, sweet Sammie has since passed away but I’m so grateful to have met him and his amazing mom.