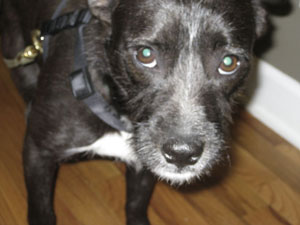 Socialization does not mean pushing your dog to do something he is clearly uncomfortable doing.

Unfortunately, well intending humans often do just that and the results can be very detrimental. I recently witnessed a common situation in which two on leash dogs walked towards each other and their guardians stopped to allow them to interact. To avoid breed, sex, size and behavioral generalizations, I will call them Jack and Sadie. Upon greeting, Jack quickly turned his head and moved a few steps behind his guardian. Sadie stopped and casually stood still. Jack was clearly communicating he did not want to say hello to Sadie, and she responded by not pushing him. Even at my far distance, I saw it. Jack’s guardian unknowingly missed his clear signals and tugged on his leash towards Sadie while saying sweetly, “Look Jack, she’s nice, say hi. It’s ok”.

He quickly jumped behind mom and Sadie lowered her head to the side a bit while remaining stationary. This time, Jack was saying please, please go away and Sadie got it by avoiding eye contact and not getting in his space. Unfortunately Jack’s guardian was showing signs of frustration and how could she not, Sadie was clearly a lovely dog and Jack was embarrassing her. She then lifted Jack from the ground and pushed him into Sadie’s face. Jack quickly squirmed out of her hands, puffed out his chest and started a grumble bark. Sadie looked frightened as she jumped and backed away.

This scene took place very quickly or I would have stopped it. Unfortunately, Jack’s guardian thought she was socializing him by compelling him to approach Sadie. The most appropriate socialization occurs when pups are developing, ideally under three months of age. However, if you rescue a dog and you should, their early development and experiences are unknown. Rather than pushing your dog to endure loud noises, children or other dogs if he is backing away, trembling or even standing still; help him learn at a slower pace these things are not as scary as he thought.

Perhaps Jack missed appropriate interactions with pups at a young, maybe his behavior has been reinforced by a lot of attention from humans when he retreats or his reaction could be due to a bad experience with other dogs. A better way to reacclimate Jack to dogs would be:

Guardian says to Sadie’s human, “he’s not comfortable saying hello” and gives Jack a little space from Sadie. While Sadie is still in eye sight, if Jack sniffs or walks a step in Sadie’s direction, mom says “good boy Jack”. They walk on their merry way and so does Sadie. Jack then learns in scary situations his guardian will protect him and that particular dog was not so bad. Sadie continues to think other dogs are super fun. We have to remember when introducing our dogs to the world, we need to consider what they are attempting to communicate and what they are capable of handling based on past experiences or their stage of development. Lots of little positive interactions with even the scariest thing can make a big difference.