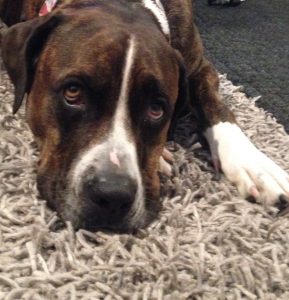 Have you ever had one of those days where you spill coffee on yourself as you race out the door, then, JUST as you notice the giant dent on your rear bumper that was not there last evening when you parked; you feel a SQUISH under your favorite pair of boots that you know has to be dog poop? Sounds a bit overwhelming, doesn’t it? Would you be able to answer a text at the moment you were trying to compose yourself, clean off your shoe and prioritize what you need to do that said, “Can I pick your brain for a second?” Likely not. What if spiders were falling from the sky while all of this was happening; would you be capable of learning ANYTHING new?

While this is not a scenario that would happen to our dogs, we do often put them in VERY overwhelming, quick-happening, stressful situations, like the above; often intensely fear-inducing. Then, we get frustrated because they are not sitting at every street corner. Here’s how you can tell if your dog is “Over It” and how to help him or her.

Dogs can lose their learning capability for a few reasons. Two common causes are THERE IS JUST SO MUCH GOING ON and overwhelming fear. Squirrels, kids running to school, ambulances, commuters racing to the train, other dogs across and down the street; the smells, sights and sounds of all the stimulating happenings can be a lot for dogs to take in. And, often they stop in their tracks, grab the leash out of frustration or simply charge ahead. There is so much to see after all.

But, dogs who are nervous around scooters, the wind or some other stimuli that you have seen him or her jump or run away from, can completely shut down. Literally, they become helpless as they plant themselves on the sidewalk because they can not take anymore. Folks often think their dog is being stubborn when he or she is turning their head away in response to a cue. But, when we see that, we know the poor creature is offering every attempt to avoid a conflict with an involuntary calming signal.

How to help. The easiest thing to do to help a dog that just CAN NOT focus because he or she is too overstimulated or terrified of so many scary monsters coming at them is to carry better treats. Sometimes, when we go outside with a client for the first time, we see a dog’s eyes light up just by using gooey, smelly, high value treats. Biscuits have little smell so they can not compete with the swarm of distractions, including listening to you.

We also find that by adding a fun game or practicing a trick before walks and doing obedience in the house when your dog is not keyed up can make a big impact. If you are only training when your pup is in an aroused, agitated, smell-a-palooza state of mind; not only will your training not succeed, but you could easily damage the bond between you and your four-legged bestie. If you are doing all of the above and your pup just WILL NOT LISTEN, go back home. Your dog does not think he or she is winning by doing so, but, you are giving both yourself and your pup a reset. By continuing to walk when your dog is trying to climb a tree and ignoring “leave it” , wait, that’s not your dog’s favorite activity too? You are reinforcing your dog for ignoring you; and likely, pulling as well.

I recently had to take away Gavin’s FAVORITE game in the world, climbing trees. My sweet little monkey turned into a frenetic, pent-up punk on our walks because I was trying to prevent him from breaking or knocking out another tooth; my savvy with HOW we chased trees was not as great as I thought it was. So, to prevent both of us from getting extremely frustrated; I kept his walks very short and more frequent. And, we always did something that allowed him to get out some serious wiggles before, after or during our walk like: jumping over my legs (please keep your dog’s age and mobility in mind with any jumping game), playing fetch at the tennis courts or killing a squeaky toy when we came home. It made a big difference in his behavior while he was learning and prevented him from becoming completely over it on walks and, with me.