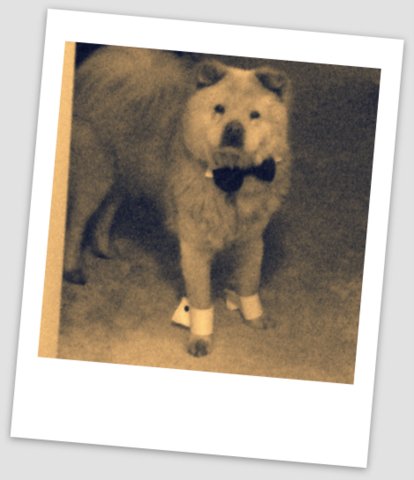 What’s more adorable than a puppy dressed as a skunk or a stuffed cowboy riding on your dog’s back? For some dogs, it’s the appetizer on a miserable menu that Halloween dishes out. Read on to find out how much (if at all) your dog should be included in Halloween hubbub.

To dress up or not dress up.

While you’ll likely get many likes on the photo of your gussied up pup, it’s not for every dog. Many dogs dislike all the gear and gadgets (often bulky or physically restrictive) involved in elaborate costumes. However, some dogs LOVE dressing up. Every dog is different, so watch your dog’s body language. If his mouth tightens, his posture appears hunkered down, or he lays on the ground with sad puppy eyes, it’s unfair to leave the costume on him and even worse to laugh while he’s silently begging you to remove the distressing duds.

If you’re unsure, start with minimal attire like our friend Indy. His bow tie, cufflink ensemble, is super cute, and he looks like he’s ready to join the party rather than collapsing into crestfallen costume condition. You may also notice that Indy isn’t wearing a top hat or fancy glasses. A lot of pups dislike objects on their face or head. Think before you dress up your dog to make sure his disguise is just as fun for him as it is for you.

The bottom line, if your dog looks miserable, take off his costume.

Once a year, your pup is exposed to people wearing imposing paraphernalia covering their eyes and causing them to move erratically, evoking confusion and fear to even the most people-pleasing pet. When your neighbor’s child wears a large hat or mask, her silhouette changes—she’s no longer the same person to your dog. So, to assure everyone has a happy and safe Halloween, grab some treats and train your dog to like ghoulish gizmos. Put on your jumbo sunglasses or clown wig and reward your dog for remaining wiggly. Play a Halloween sound on your laptop (low volume) and reinforce your pup for relaxed body language.

Often when I coach folks to desensitize their pups to sights and sounds that might scare them in an unfamiliar place or with an unknown person, their response is, “I tried it, but he didn’t do anything, so I stopped.” Why would you stop? You’re not training your dog to run, cower, or tremble when you put on a unicorn wig. You’re teaching him to relax when someone he knows and trusts dons a Medusa headdress, so when a stranger wears the same costume, it’s less scary.

In dreamland, it’s a grand idea to include your dog in trick-or-treat festivities, but, as I’ve already mentioned, costumes can be downright unnerving to dogs so, a parade of masks, hats, glasses, and devilish duds coming at your dog may cause horrible trauma. Not only are you asking him to endure endless eerie ensembles, but groaning, creaking, and rattling lawn decorations make trick-or-treating extra terrifying for fearful pups.

If you choose to keep your pup at home, someone should stay home with him, ensuring he feels extra safe. For some dogs, kids galore at the door incite the SOMEONE’S HERE response over and over again, so plan to make sure your precious pup doesn’t escape—one second of sidewalk stirring could send him scurrying into the street.

For the specially scaredy dogs (especially if you can’t stay home), it’s best to put a nice note on the door asking neighbors not to ring the doorbell. If you leave a basket of candy for trick-or-treaters on the front porch, you’ll prevent your pup from getting roused up every two seconds and still be a good neighbor.

Help your fearful or anxious dog by staying home and preventing commotion that may scare him.

While Halloween is fun for many humans, please keep these tips in mind, so your hound’s holiday isn’t a harrowing experience.