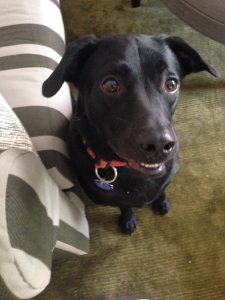 Before Lil’ Big Head stole my heart, his rescuers found him tied to a stake outside and shot with a BB gun. I can only guess that his trembling and flattening onto the sidewalk like a buttery pancake the first few months he lived with me were due to a pretty tragic past.

I worked hard to teach Gavin that he could trust me to protect him from all the scary sounds of the city, and he’s been bouncing through my neighborhood for almost three years now. If you read my blog a couple of weeks ago, you know Gavin’s ABSOLUTE TERROR when he hears a jet zooming through the sky has rebounded. When you share your life with a cowering canine, you know the acute repercussions that one surprise SCREECH from a garbage truck or the grumble of a low flying airplane can have on your beloved dog.

When the world is too ghastly to bear—dogs like Gavin refuse treats, and petting doesn’t soothe SOME pups. What a shaken dog wants MORE than anything is to GET AWAY from whatever is causing his misery at the moment.

Why not use escape as a reward?

If you flee with your ‘fraidy fido at JUST the right time, you’ll find that your pup will begin to offer more brave acts and, most of all, that he can depend on you. The latter will remind your dog that you’re a team and his champion. It does take a bit of finesse to use fleeing instead of treats. If your dog starts trembling or pees an ocean, you’re moving way too fast.

I worked with an amazingly sweet lab mix. I’ll call him Bubba. His fear of going on walks was so profound that when we first started working together if I put my hand on his leash (forget about clasping the leash to his collar), he peed SO MUCH on the rug that I thought we might have to call in an expert to name a new lake.

So, I got the leash out before I asked him to army crawl out from under the bed, another big boy skill he worked hard to learn. And I sat with the leash behind me and moved my hand an inch or two towards it. If Bubba didn’t pant or turn his head, I said “yes” and rewarded him.

I watched Bubba CLOSELY, to make sure he wasn’t even close to running away, crouching, or flattening his ears. After a few repetitions, not 10 or 20, of super-plucky-pooch-behavior (for him)—I made a big deal about the leash going away. I wanted Bubba to know that I wouldn’t push him—that I saw how hard he worked and how difficult that task was for him. And with patience and practice, when Bubba saw me grab the leash, he ZOOMED around the living room—SO PROUD of himself.

Don’t be a pusher

When you have a dog who’s behavioral response is so intense that he stops moving and his panic-stricken eyes rip your soul to shreds—especially in areas where you have no control over petrifying triggers—you build courage by working on the behavior in a safe environment, in tiny doses. And compassion is critical. During your ten-minute training sessions, your pup needs to understand he’s out of danger. Humans LOVE to push, we do.

Your goal when you’re training with scary stimuli is to end the session with your dog WANTING more. Playing an airplane sound on YouTube at the lowest volume possible may not feel like much to you. But, it’s a CRAZY big deal for some dogs. And unfortunately, right now, when you go back out into the unpredictable world, those same triggers will still cause emotional havoc for your fur babe. Teaching bravery takes time.

In the real world, escape is an amazingly powerful reward. Gavin and I’ve been darting all over Albany Park. The key to doing this correctly is, first and foremost, DON’T race away from the wicked fire engine when your dog has frozen in his tracks and is looking around at anything, except you. If your dog’s fear has caused all physical capabilities to stop completely—he could get hurt if you try to cross the finish line to safety briskly.

I know that the sound of dogs barking from inside their house is a source of stress for Gavin right now. So, if I hear a dog yapping and take a glance at Gavin to make sure he is still relaxed, chill, even happy, I say “hurry,” and we run past their house. My sweet Lil’ Big Head flies with me when I say this, and he smiles his charming, googley eyed grin, because I gave him exactly what he wanted and needed, space from what scares him.

Did you notice I didn’t say that I KNOW he heard the dog barking? He’s a dog, he heard it before I did.

Is Gavin completely cured? No. But with every “what’s that” and treat when I can catch unnerving noises early enough, pause when he really needs it, and moving faster past howling-hound-houses, we’ve made great strides in the past few weeks. And Lil’ Big Head trusts me when it matters most.

******Don’t use this technique with an aggressive dog in a highly populated neighborhood or busy day. Running gets dogs charged up. If your dog is already leash reactive, moving quickly is going get him more fired up. An over-aroused dog who then sees a trigger that under normal circumstances causes lunging, barking, or growling is a BAD combination. ******